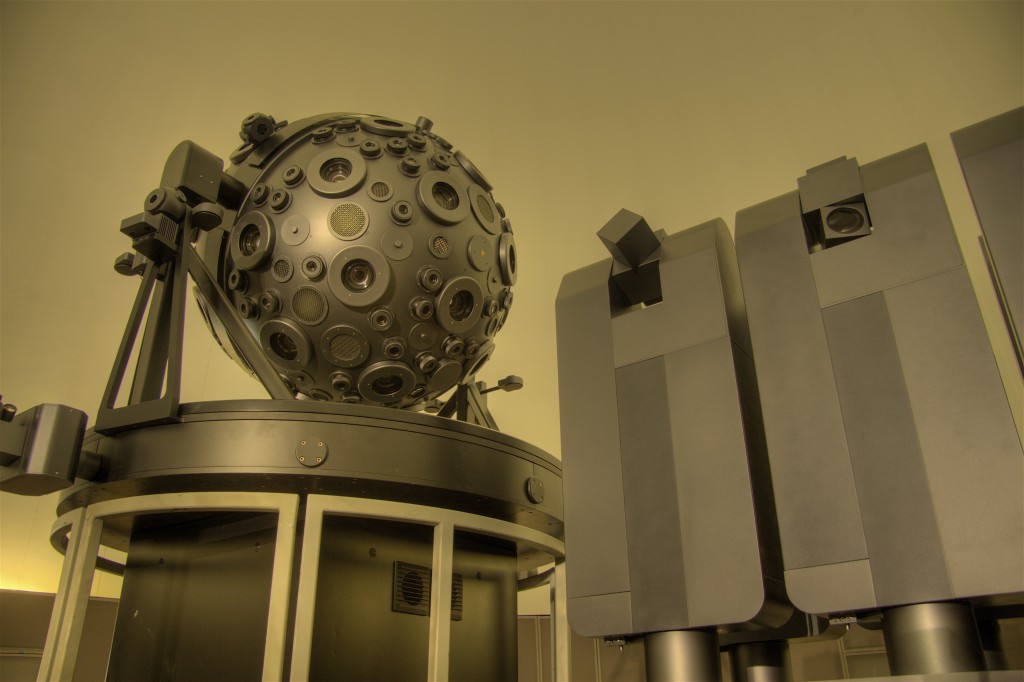 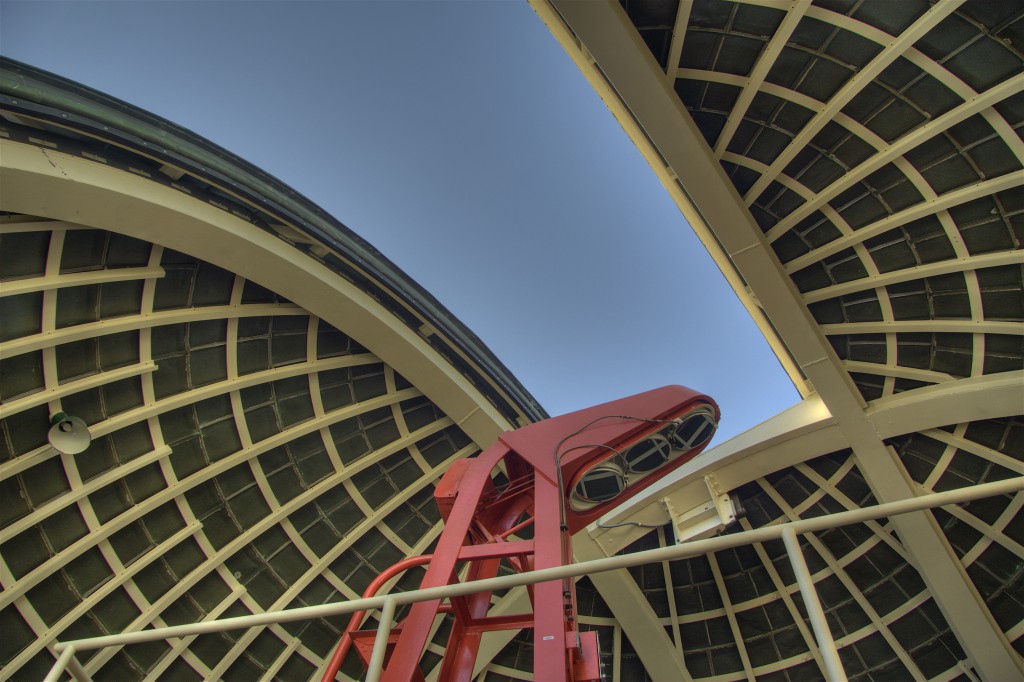 Last week I got a pre-tour of the new setup at the Griffith Observatory. I took some HDR photos of the awesome new Zeiss Universarium IX among other things. You can check out the full album here. I will be writing several pieces about what I saw in the next few days, keep an eye out for them on MetroBlogging Los Angeles. [Note: I didn't have / use my new lighting setup for these shots.]

Update Here is the article I wrote on b.la.

As I mentioned in the last few posts that I just posted in a spurt of posting activity, that I am building up a portable, battery powered lighting setup. I didn't feel like spending $3,000+ on a "real" head / pack lighting system as of yet, although some day I will end up buying one, most likely the Dyna-lite setup at first, but then eventually a Profoto rig. Portability is probably the biggest factor for me, as I don't have a studio to shoot in, so nearly all my work will be done on location. Many of the locations I plan on shooting will be either outdoors, or in places where lack of line voltage would be a limiting factor.

I already possessed a Quantum Turbo 2x2, which I've been very happy with in combination with my Canon Speedlite 580EX. I didn't want to buy another 580, because I didn't plan on using E-TTL for my portrait lighting, so after some research I decided to pick up the very moderately priced Sunkpak 120J Auto Pro, which is a bare bulb flash, that can be powered directly by an HV power pack, without needing any other batteries, unlike the 580EX.

Unfortunately Adorama sent me the TTL version of the 120J, which didn't come with the sync adapter, so I bought the standard shoe adapter that has the sync connector. This really isn't what I wanted as I will never actually be mounting it on a hot or cold flash shoe. I am trying to work it out with Adorama now, I need the flash for some work I have coming up, and they want me to buy the right one, even though it was their mistake in sending me the wrong one, and then send back the wrong unit when the new one comes. I feel like they should take the hit, send me the new one and I'll send them back the wrong when when I have received the correct model. I will see what happens, but I have a feeling that I am going to have to do it their way, which is too bad.

So as I wrote about earlier, I am using the 2 PocketWizard Plus II transceivers to trigger the flashes, which I am bouncing off or through a couple of convertible Photoflex umbrellas, that are sitting atop one Photoflex stand and one Avenger Stand. The third PW is on atop my camera in the hot shoe and I am using the Sekonic L-558R to meter the scenes. I also just picked up a couple of used C-Stands, and although they're heavy as hell, they're very sturdy and will be great to hold my convertible reflector and down the road flags, scrims, fingers, dots, etc. I also bought another Quantum battery, this one a Turbo Z. I have some sand bags and cases for the stands in the mail. In the future I will be buying some Chimera softboxes

My first results have come out quite well, but I still have a long way to go, and I am planning on taking some lighting classes, and maybe attending a workshop or two.

Now that I'm building up my studio / location lighting kit, I can no longer rely on my trusty Canon 580EX's built in E-TTL system to do the dirty work of exposure calculation for me on the fly. E-TTL is great, don't get me wrong, but it only works when the flash is either on camera, off camera with the off camera flash cord or triggered with Canon's IR remote, which only works if your flash is facing you and you were within a fairly distance from your flash and within a fairly narrow angle. I logically decided that I needed a flash meter.

There are plenty of flash meters out there, from the trusty analog flash meter to high end digital meters with built in radio slave transmitters. I thought of it, like many folks think of tripods, that you can start out with the cheapest you can get, but in the long run you'll most likely end up spending more on upgrades until you get to where you want to be, than if you just shell out the money for the good stuff up front. So I decided on the latter, and shelled out the roughly half grand on the Sekonic L-558R.

The Sekonic L-558R is an easy to use (once you've read the manual) and sturdy flash meter, that also functions as an incident and reflected spot meter. The meter will read your flash in both incident and reflective modes, I think it is pretty cool that you can take a spot meter flash reading, but I'm sure there are other units that can do the same thing. As I mentioned before, the meter has a PocketWizard module that is built into the L-558R which allows you to trigger your flashes directly from the meter without using a sync cord.

One of the features that I find most useful is the ability to meter you key light, and then meter your fill light, and the meter will give you the difference between the two in EVs. This is an easy way to figure out the ration between your key and fill. You can also fire a series of flashes, storing each one in memory, and then get either a cumulative or average reading.

The meter itself is very compact, fits nicely in your hand and feels solid and well built. I would prefer the device didn't require the expensive 3V lithium battery that could be tough to procure in a bind, but I guess they decided they could make it a tiny bit more compact if they used the 3V lithium as opposed to using 2 AAs or AAAs. The only other issue I have with the meter isn't actually related to the meter, but to an older spot meter that I've been borrowing from my mother to use with my Mamiya RB67 setup, which was "modified" by Zone VI to have a nice little movable zone scale on the side, which makes ensuring that my exposure contains the data I want much easier. I know that I can just take an EV reading and put that into either my mental Zone chart, or I can put it on my handy Zone worksheet, but the little paper ring on the manual scale was really nice.

Before I bought the L-558R I found out that Sekonic is coming out with a new meter, specifically tailored to digital cameras, called the L-758DR. The 758DR allows you to load 4 custom profiles into the meter via a USB cable so that the meter will "respond to light exactly like your digital camera or type of film." Another very cool and helpful feature is the ability of the meter to warn you if you are outside the dynamic range of your medium. The 758DR is also extremely sensitive, down to f-2.0! I may or may not upgrade when it comes out. The 558 has all the features I really need and many more.

The Joy of PocketWizards

After researching the ideal flash slave system for months I settled on the PocketWizard system. In reality, there wasn't much of a question in my head as to which system I was going to buy, this may seem a bit silly, but they had me at the ads. Their full page ads run every month in Shutterbug and many other photo mags, and their system is built in to several competing brands of lights including Profoot, Dyna-lite, Speedotron and Norman. There is fairly solid consensus in the professional photo industry that the PW system is the best you can get. The only other serious player for radio slaves is Quantum, but they just aren't as slick.

I just picked up a set of 2 Pocketwizard Plus II transceivers from Adorama and a third unit from Samy's Camera and they are nothing short of wonderful. Not only are they absolutely simple to operate, they just plain work. After about 500 shots fired, I've never had a single misfire. They are light-weight, compact, and as far as I can tell, very sturdy. They have a range of roughly 1500' and they will receive and rebroadcast signals so that range is really only limited by the amount of units you own. I recommend these units without reservation.

I have recently begun putting together my portable studio lighting setup. I need portability and the ability to shoot in the field off the grid. I will expand more about this in a later post, but I am writing this to address the poor quality of Photoflex hardware. I ordered a Photoflex umbrella kit that included a reversible umbrella, stand and shoe mount flash clamp from Adorama. So far the umbrella and the stand have worked out, although were made in China and feel cheap as far as their fit and finish.

After the first kit arrived I made my way over to Samy's Camera on Fairfax and bought another umbrella and clamp, plus a stand, but not a Photoflex, I decided against buying another one of their stands and picked up a high quality Manfrotto Avenger Mini-Max. When I got home I set up everything and took a few shots and everything worked just fine. The next day I set it all back up and lo and behold I noticed that the screw that holds the umbrella into the clamp had stripped and would no longer hold the umbrella. The Photoflex umbrella clamp has metal threads for every screw except the one that hold the umbrella, which feeds directly into threaded plastic. It is not surprising that this stripped. I have vowed to never buy another piece of Photoflex equipment. I really shouldn't have bought any in the first place.

I took the clamp back to Samy's and although I didn't have the box or the receipt, the salesman looked me up in the system and gave me full credit for the item, after chiding me for throwing away my boxes. I normally never throw away boxes for anything that costs over $50, but I guess I should at least hold on to the boxes for the cheap stuff for a week or two. I used my credit towards a nice, high quality Manfrotto clamp, which is made out of aluminum, brass and steel. It looks and feels like a quality piece of equipment, and it is made in Italy.