Three weeks ago, my lovely wife Penelope and I hiked Los Angeles County's tallest peak, Mt. San Antonio, also known as Mt. Baldy. It was a great day hike, with a hefty elevation gain and beautiful views of Southern California.

We started out later than we had originally planned, this was due to me sleeping in. I realized later that I slept in because I was worried about being able to complete the hike.

The route we took was 12 miles round trip, with over 4,000 feet of elevation gain. Those 4,000 fee up occurred in the first four miles of the hike.

We parked at Manker Flats and took the fire road up until we reached the Baldy Bowl trail. The trail cuts almost straight up from the road and is easy to miss, but we had a picture which helped us find it.

We headed up the trail for about two miles when we reached the San Antonio Ski Hut, also known as the Baldy Hut. At the hut we met some cool folks from the San Diego SAR team who fed us fresh baked cookies. After hanging out for a few minutes at the hut we continued on up the Baldy Bowl Trail.

Shortly after leaving the hut we reached some very steep switchbacks. It was tough going, and for the first time I can remember on a hike, Penelope was in no mood to make small talk. After we crested the last switchback she was feeling better and the chatting resumed, thankfully.

A few miles and another couple thousand feet of elevation gain later we were at the top. It took us roughly three hours to get to the summit. We sat down and enjoyed our well-deserved lunch. After eating we hydrated, put on a layer and headed down the Devil's Backbone Trail.

After the first part where the trail got narrow, I said, this isn't so bad, I wonder why people write that it is scary. A few miles later we got to the actual backbone, which was only a few feet wide with steep cliffs on both sides. It's not too bad in the summer, but according to my SAR teammates, it's quite frightening in winter when it's a giant ice-covered cornice of death.

When we made it down to the ski area we contemplated taking the chairlift down, but decided against it and continued down the fire road. The fire road isn't the most visually stimulating area and its long, gradual slope made for a somewhat boring end to the hike.

By the time we got to back to the car we were ready to get home, relax and have some tapas at Ciudad. We were exhausted, but happy that we made it, the whole hike took us just about 6 hours round trip.

Baldy was a great hike and we're looking forward to doing it again soon. I would recommend it to anyone looking for a vigorous day hike. 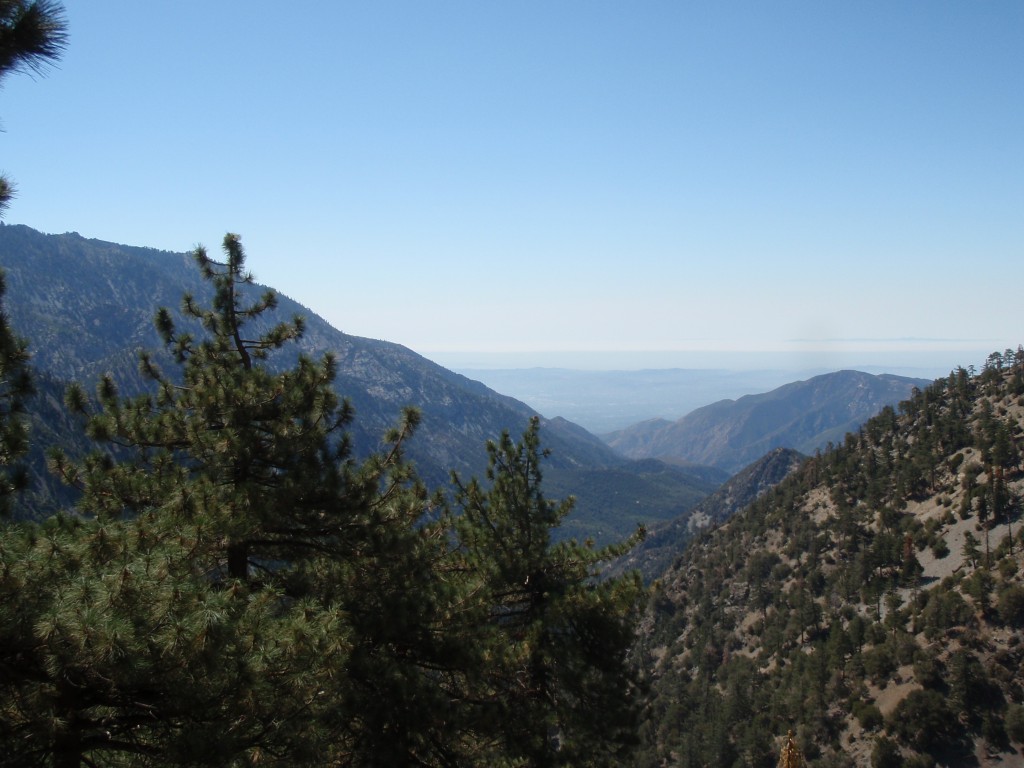 The sky is clear in the view looking out from the first mile of the Baldy Bowl trail. 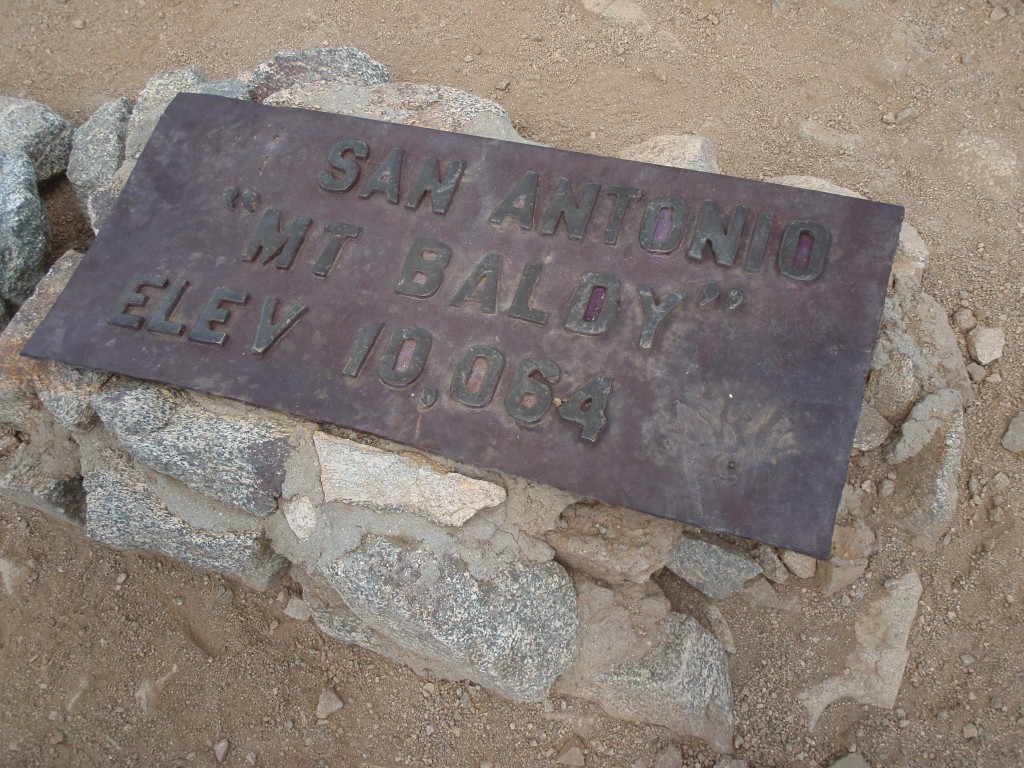 This steel marker sits on the peak of Mt. San Antonio, AKA Mt. Baldy, the tallest peak in Los Angeles County. 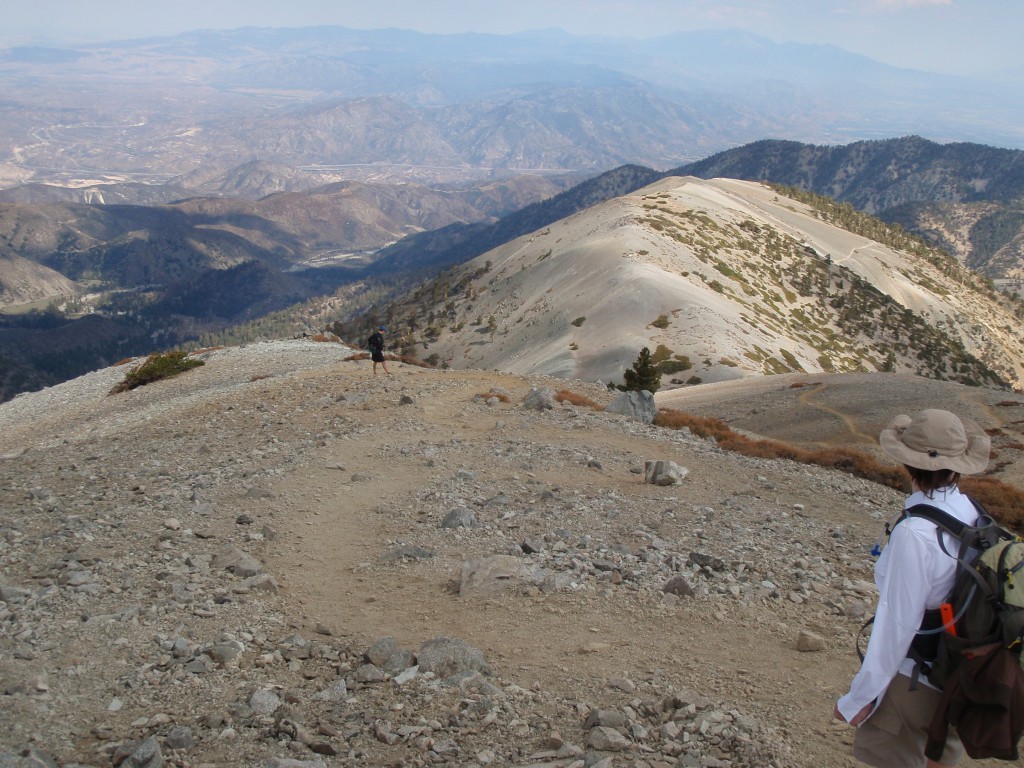 Penelope starts down the Devil's Backbone trail after reaching the summit of Mt. Baldy.